More than likely we’re all guilty at one time or another of pushing ourselves too hard…at CrossFit, nutrition, a race, work. Whatever. It doesn’t mean that you’ve done the move incorrectly or that you’re not eating right, but (and yes, its true) it is possible to do something too much or to push yourself too hard. There is a balance for everything in life and while I encourage everyone to test their limits with CrossFit, we do have to know when enough is enough. I read a blog recently on the beastmodaldomains.com website called “WODaholics Anonymous – The Consequences of Overtraining” based on one guy’s personal experience with overtraining. He’s candid, a bit crass and totally honest.

WODaholics Anonymous – The Consequences of Overtraining

My name is Epic, and I’m a WODaholic.  While no 12-step program exists for CrossFitters, and experts debate as to whether physical exercise is addictive, we’ve all felt the effects of endorphins being released during a metcon.  What is that?  Chemically speaking, endorphins are endogenus opioid peptides.  I’m not smart enough to know what that means but we see that “opioid” word in there.  Basically your body produces these little neurotransmitters that closely resemble opiates.   Drugs, bro.   A feeling of well-being and happiness similar to what a crack-head feels while smoking that rock he scored as a result of stealing your mom’s new laptop.

Freddie Camacho, owner of CrossFit One World and former Games athlete wrote a piece on SICFIT last year titled ”WOD Drunk”.  In it he describes the manifestation of WOD Drunkenness as the degradation of form and movement standards towards the end of the metcon along with incoherent speech, nausea, as well as forgetting personal effects at the gym as you leave.  We’ve all been there.  But that post-WOD feeling is awesome isn’t it?  You busted your ass in the gym and earned the impending hypocrisy of the soapbox rant you’ll give to your non-CrossFit friends about how fucking Paleo you are (while you drink your 4th pint of Sam Adams).  Damn, it feels good to be elite.

So, are you addicted to CrossFit?  Hopefully not enough to perform truck-stop bathroom sexual acts in exchange for your gym membership dues, but you may be somewhat dependant on that WOD fix.  I know I am.  The WOD fix part, not the truck-stop bathroom part.  The result of my addiction, which went unchecked, was overtraining.  Overtraining opened the door for injury, and here I sit with an elevated and casted leg encasing a surgically repaired Achilles tendon.  I haven’t worked out in three weeks.  Instead of lamenting, I’ll parlay the example into my own hypocritical soapbox rant.  Or rather, you can take this as a “Don’t do what Epic did” confessional. 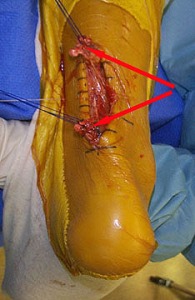 The Achilles rupture occurred during box jumps.  At no point during the movement did I land improperly.  It was just that I was doing a lot of them, at high intensity with a great deal of residual fatigue.  Fatigue which grew from the training that led up to and followed the Mid-Atlantic Regionalsas well as the mighty X-Corp race two days prior.  Many have said, “Listen to your body”.  I listened.  My body was sore, but not enough to be a pussy and take more than one rest day.  I told my body to shut the fuck up and flip the switch, 3-2-1 go.  Where did that get me?  I’ve been laid up like a slob and in a great deal of pain.  One of my low points from the days following surgery: I found it was much easier and less painful to pee sitting down as opposed to the way a man should.  No offense ladies, but for me that’s a no-go.  Dignity – zero.

While this isn’t a urination tutorial (watch Bear Grylls on Man vs. Wild for that), it’s a challenge to you thick-headed athletes who have become so dependent on your WOD fix that you skip a rest day because your coach programmed Cindy (no one wants to miss Cindy).  Rest and sleep are preached by our coaches, yet some of us choose to ignore the advice.  The potential effects can be detrimental to what you are working so hard to achieve.   Timothy Ferriss, author of “The 4-Hour Body” said, “The minimum effective dose in the context of exercise and diet is treating both of those things as a drug.  If someone prescribes you a drug, you’re given a specific dose for a specific outcome.  If you get less of that dose, you don’t get the desired effects.  More than that dose, you get side effects.” By overtraining, you are short-changing your recovery period which will inhibit the process ofcsupercompensation (the post-recovery period during which the trained parameter has a higher performance capacity).  Simply put, you don’t get stronger.

Here’s a piece of advice for you type-A, competitive bastards who have found you only listen to your body when it’s screaming at you to rest:  talk to a coach and set up a training schedule that accounts for proper rest time and follow it.  Even if you feel like you could go another day and even if “Fight Gone Bad” shows up on the whiteboard.  You’re not going to get weak by resting.  The opposite is true.  You could end up like me (currently I have slightly more athletic prowess than Stephen Hawking).

Some of you who read this may find it to be pointless rambling and whining about an injury.  You’re right and you probably have no problem taking necessary rest days because you’re not an idiot.  It also means I have something to learn from you.  Next time you see me, kick me in my bum leg and call me a dumbass.  Those of you who identify with what I’ve written, you may have a problem and need to reassess your approach to fitness and the overall reason as to why you have chosen CrossFit as your training platform.  Any of us who have ever made a sweat angel on the filthy mats have decided that “easy will no longer suffice”.  Likewise, we may be hesitant to rest appropriately because we feel it may impede our progression.  It’s no surprise that linear progression halts once you stop training altogether as a result of injury.

Rest up.  Active recovery doesn’t mean come to the gym anyway and do the posted WOD at only 80% intensity.  Do your mobility, take your fish oil, and eat vegetables and dead animals.  When it’s time- flip that switch, go Beastmode and destrominate that WOD with intensity, aggression and foul language.  Keep coming back.  It works if you work it.