Top of the Podium

Julie Foucher is likely a name or face you recall seeing when she placed 2nd in the 2012 CrossFit Games or during the CrossFit Open 2013 when she demonstrated all the WODs. The following is an article she wrote that reflects on the opportunity we have today and how what we do with that opportunity sits squarely upon our own shoulders. How we will take advantage of these opportunities and have the confidence to put ourselves out there to achieve whatever it is in life we want to achieve?

Top of the Podium

When my attending stepped out of the room, the patient looked to me and asked, as many do, “How far along are you in medical school?” She was a sharply-dressed woman in her mid-eighties whose cane hardly slowed her down from flying in from Chicago that morning after visiting her grandchildren. Before I could answer her question, however, she remarked, “Oh, you are just so lucky! When I was your age, becoming a doctor wasn’t even a possibility that entered my mind. I was a nurse, but I always thought if I’d had that opportunity I would have made a great doctor.” As she went on to tell me how proud she was of her grandchildren who were pursuing higher education and wish me luck and encouragement in my studies, I was reminded again of how much I take for granted being raised in a world full of opportunity.

As this patient reminded me, women have opportunities today that those only a generation or two before us couldn’t fathom, and we are taking advantage of many of these opportunities. In 2011, for example, 48% of medical school graduates were women; compare this to 30 years ago, when only 27% of graduates in 1983 were women.1 Despite the fact that we are training more female doctors, however, these trends have not translated to healthcare leadership: only 18% of hospital CEOs and 4% of healthcare company CEOs are women.2  Why is this so? While the barriers to career advancement for females in healthcare are many, I’d like to focus on the most commonly cited by the 2011 Rock Health Survey of women in healthcare: self-confidence.2

Facebook COO and Lean In author Sheryl Sandberg speaks to this barrier in her 2010 TED Talk where she focuses on what we can do as individuals to increase the representation of women in leadership positions. Using an anecdote about a class she took in college with her female roommate and her brother, she describes the tendency of males to exude confidence and attribute their successes to themselves, while females tend to attribute their successes to external factors including co-workers and luck.

Hearing this story reminds me of the ways I have come to witness this feature of the female psyche manifest in both myself and fellow female competitors at the CrossFit Games.

CrossFit as a whole has treated male and female athletes with equal respect and opportunity from its inception.3 Workouts of the Day (WODs) posted on CrossFit.com do not include scaling options for females or any other subset of the CrossFit community, suggesting that individuals may chose to scale appropriately but should not feel limited in any way, for example by age or gender. 40% of this year’s CrossFit Games Open participants were women, and on any given day one can expect to drop into a local CrossFit affiliate to find women besting men in workouts involving deadlifts, cleans, pull ups, and the like. CrossFit’s dedication to providing equal opportunities regardless of gender also extends beyond the WOD. Hope for Kenya mobilizes the CrossFit community to raise money to build water cisterns which free Kenyan women from their duties of traveling miles for fresh water each day. In doing so, young girls are provided the opportunity to pursue education and a brighter future. As the Sport of Fitness, the CrossFit Games, has experienced exponential growth over the past several years, it has also continued to provide equal opportunities for competitors of both genders. Prize money, now totaling well over $1 million is distributed equally among male and female competitors, and the number of segments featuring CrossFit Games events on ESPN2 are also gender-equal. Events including 2012′s Pendleton triathlon and 2013′s Pool and Row have also allowed male and female competitors to compete alongside one another, performing the same work.

Despite the abundant opportunities we have as female CrossFit athletes, natural differences between the male and female fields of competitors remain. While it seems that hard work, dedication, and talent should be the only factors distinguishing those who stand on the podium from those who do not, from my own experience and that of my peers, sport is another place where self-confidence can become our greatest barrier to success. Similar to Sheryl Sandberg’s story, a quick sampling of athlete profile videos on the CrossFit Games site will demonstrate that male competitors are more likely to outwardly express their desire and belief in their ability to win. Female competitors, on the other hand, are more likely to state that they “just want to do their best” or are simply happy to have the opportunity to compete. It comes as no surprise that the female athletes who do exude self-confidence and a belief in their ability to win including two-time champion Annie Thorisdottir, 2013 champion Sam Briggs, and 2013 runner-up Lindsey Valenzuela find themselves successful.

So why is it that women frequently lack confidence in their ability to succeed? Perhaps it’s a fear of vulnerability, not wanting to feel disappointed by falling short of a goal. As Sheryl Sandberg suggests, perhaps it’s a fear of not being well-liked, as research shows that successful women are far less likely to be well-liked than their successful male counterparts. Maybe, as Elisabeth Akinwale suggests, it’s a struggle to strike a balance between the virtues of humility and confidence. Self-confidence has been my own downfall as a CrossFit Games competitor in the past, and I can attribute its lacking to each of these reasons to some degree. Examining my career as a medical student thus far, I find similar instances where I wonder whether my own self-confidence has limited my performance. Most recently, for example, I was happy to receive a USMLE Step 1  score that exceeded the goal I had set for myself months ago – but what if I’d had the confidence to set that initial goal higher?

So, knowing all of this, what can we as individual women do about it? We are privileged to live in a generation where opportunity is abundant. There are too many other barriers to success in life to allow a lack of self-confidence to be one of them. This year, I’m vowing to set my sights on the top of the podium at the CrossFit Games. Sure, I might fall short, but if I do, I’ll know that it was because of my physical performance and not because of a lack of belief in myself. So, ladies, whether it’s looking toward the top of the podium, a stellar exam score, a career change, or a job promotion, let’s set our goals high this year and refuse to allow a lack of belief in ourselves to hold us back. Who’s with me? 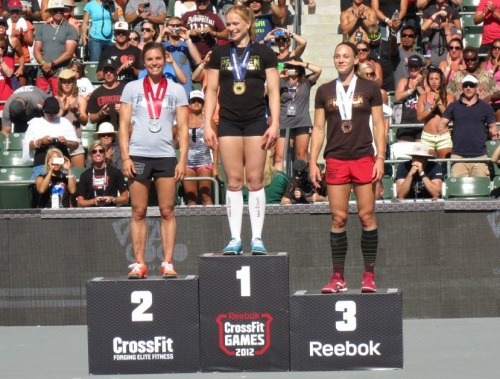 This post was inspired by XX in Health Week, celebration of female leadership